9 homes for sale in Parkwoods Donalda 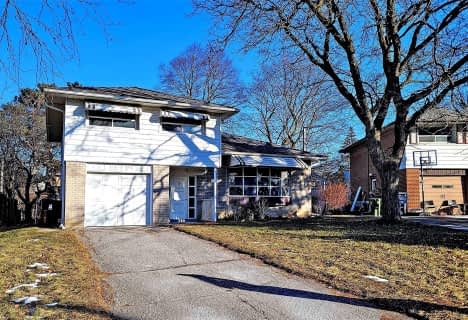 Parkwoods is sometimes referred to as Parkwoods-Donalda forms its boundaries from Highway 401 to the north, Victoria Park Avenue to the east, Lawrence Avenue and the Canadian Pacific railway tracks to the south and the Don Valley Parkway to the west. Although these main roads surround the area, it’s a surprisingly quite environment.

Real estate in Parkwoods-Donalda is popular because of its natural beauty thanks to its location. Positioned on the eastern edge of the Don River Valley, the setting in this community includes gently rolling hills and tree-lined streets.

In the North West corner of the community is the area known as Graydon, which is constructed up on hillside grounds and is home to the Donalda Golf course. Within in the community exists numerous local parks with a wide range of facilities for the use of the residents.

Brookbanks Park, winds its way through the core of this area. It is a verdant ravine valley with a thick layer of foliage and a wood chip nature trail. This park also includes a paved path that is perfect for many forms of exercise is accessible year-round. In the colder months, resident’s cross-country ski and snowshoe in what feels like a beautiful, winter wonderland.

Homes for sale in Parkwoods-Donalda are majorly populated by recent immigrants who are new to the city. Dwellings include a mix of lower income and middle income families. Visible minorities, over 50% of the residents make up this neighbourhood. The ethnic groups consist of Chinese, Blacks (African, Caribbean) and South Asians.

The region south of York Mills Road is a moderately wealthy area, with a great amount of original purchasing homeowners from the years of 1957 to 1962or their heirs are still occupants.

Parkwoods' unpretentious housing stock was built in the 1960s; the styles consist of ranch-style bungalows and split-level houses. However, the architecture is mixed and includes elements of Tudor and Georgian Revival in addition to contemporary-style houses.

Parkwoods similarly consists of a large number of semi-detached houses north of York Mills Road and a big concentration of rental and condominium townhouses south of York Mills Road. A new luxury condo for sale in Parkwoods-Donalda is situated on Brookbanks Drive.

The Parkwoods-Donalda neighbourhood and Parkwoods Village Drive has historical significance. Roughly around 1833, a teenager by the name of John Coulson moved to Canada from England. He built a log house on what is now known as the north-west corner of Parkwoods Village Drive and Victoria Park. Extraordinarily, the Coulson log cabin maintained standing until 1956 when the area began to become built up.

Charles D. Maginn was one of Coulson's long-time neighbours to the south. He was a Welshman who came to Parkwoods area at around 1832. Maginn was a general businessman who had a farm and was great at spearing salmon. The Maginn's frequently lent out their orchard to the Wesleyan Methodist Church for field meetings.

MLS listings might make mention that some errands can be accomplished on foot in this neighbourhood. Parkwoods-Donalda real estate agents might tell potential homebuyers that the area is very well served by the Toronto Transit Commission.

Commuters can enjoy convenient access to the downtown centre and Toronto's network of motorists’ highways via the Don Valley Parkway. To access these roads, north and south on-ramps are located off Lawrence Avenue and York Mills Road. The Highway 401 on-ramp is positioned right off Victoria Park Avenue.

Parkwoods residents have many shopping options including Victoria Terrace which is located on Lawrence and Victoria Park Avenues. This shopping strip has a food market, bank, postal services, a large toy shop, restaurants and medical as well as professional offices.

Donwood Plaza is located at Lawrence Avenue and Underhill Drive and is a small neighbourhood plaza which includes professional offices, a food market and restaurants. Victoria Park also houses some small local shopping centres with an assortment of retailers and restaurants.

Parkway Mall is positioned at the south-east corner of Victoria Park and Lawrence Avenues and is flanked by a supermarket and a department store. This indoor shopping mall sells everything residents would need including home furnishings, stationary and books, ladies, menswear and specialty clothes, etc.

Parkwoods-Donalda is home to a great quantity of entertainment attractions and recreational opportunities. For the fitness lovers, pleasure skating is available at the Fenside Arena and year-round tennis is available at Cassandra Park. The Broadlands community centre also has an outdoor pool. Local parks are available to the residents and include a wide range of facilities such as children's playgrounds, baseball diamonds, basketball and tennis courts as well as indoor and outdoor pools.