3 homes for sale in Ionview 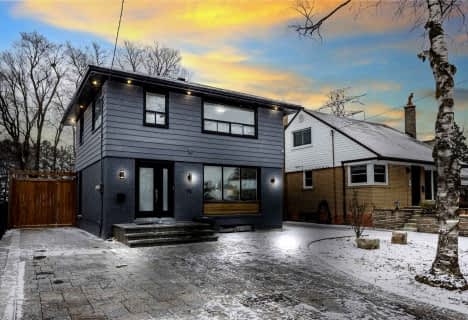 Ionview has 12 homes on the market. Of the 10571 total properties listed in Toronto, Ionview makes up just 0.1%. The average asking price of a property in Ionview is $2,682,967, with an estimated mortgage of $9,089 per month. That is 1.5 times of the average asking price of $1,771,001 in Toronto. Properties listed in Ionview are an average of 333 square feet, with 5 beds and 6.3 baths. Ionview has 8.3% apartments relative to all the other listings in this neighbourhood.

Real estate in Ionview consists of sections of the area including the modern region where the former village of Wexford was once contained in. It was founded in the 1840s, and Scarborough Junction was established in 1873. The area stayed generally pastoral until the postwar housing rise of the 1940s and 1950s.

The Taylor-Massey Creek is an eastern branch of the Don River which flows through the Eglinton Ravine in the southwest part of Ionview. Green space within this Scarborough community includes Eglinton Ravine Park, stretching from Eglinton Avenue East to the railway, essentially located om Ionview Park, and Jack Goodlad Community Park in the north.

Homes for sale in Ionview house a majorly working-class populace. Over half of the population lives in residential rentals and the neighbourhood has a preponderance of apartment towers. In 2001, there was a higher percentage of children under the age of 4 living in Ionview compared to the rest of the Toronto average.

North of Eglinton, pockets such as Treverton Park, situated on the east side of Kennedy Road, house somewhat larger bungalows, split-level homes and detached, two-storey dwellings. These residences were built in the 1950s and '60s.

Scarborough Junction also holds a big amount of high-and mid-rise rental apartment buildings, situate on the marginal streets of this community. A lot of these buildings are owned by the Metro Toronto Housing Authority and offer rents aimed towards income.

This community is part of the federal and provincial riding of Scarborough Southwest. Lorenzo Berardinetti is the representative of Ionview in the Ontario Legislature and Dan Harris in the Parliament of Canada. The Toronto Police Service's 41st Division is based in the area.

Scarborough Junction got its name in 1873, when a post office using the same moniker was opened in the Bell General Store which was located on the south-west corner of Kennedy Road and St. Clair Avenue. The Junction part of this name denotes the two railways - the Grand Trunk and the Toronto-Nippising - which met at the south end of this area.

In 1896, the Scarborough Junction was the most densely populated region in the previous Township of Scarborough. It had its own school, general store, and the Bethel Methodist Church. The historic Bethel Church Cemetery is silently nestled away off Kennedy Road, south of Eglinton Avenue.

The building of Scarborough Junction took place in the late 1940s and the 1950s when farm fields were swapped with rows of housing for war veterans' and cozy small bungalows. These houses sold very fast to young families who were looking for affordable residences in what was then the outskirts of Toronto.

Ionview real estate agents’ MLS listings might mark that this neighbourhood is extremely well-connected to the rest of the city. Ionview is very well serviced by public transit, with bus routes along the TTC's 17 Birchmount, 34 Eglinton East, and 43 Kennedy bus routes. Kennedy station, the eastern terminus of the Bloor-Danforth subway and southern terminus of the Scarborough RT, is directly south of Ionview.

Real estate agents in Ionview can tell potential homebuyers about all the nearby amenities and shopping districts. Here, the major retail shopping section accommodating this community is located along Eglinton Avenue.

The Kennedy Park Plaza located on Kennedy Road, and the Greystone Plaza at Danforth and Midland, are two smaller shopping areas that service the everyday household needs of the residents of this community.

Scarborough Junction has a huge number of smaller parks with a variety of amenities including baseball diamonds and children's playgrounds.