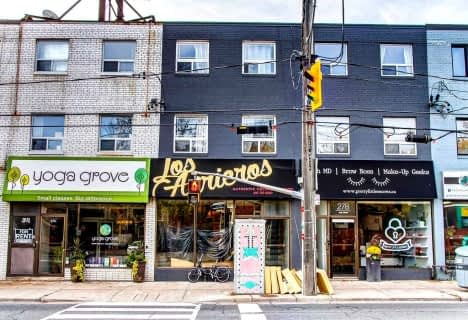 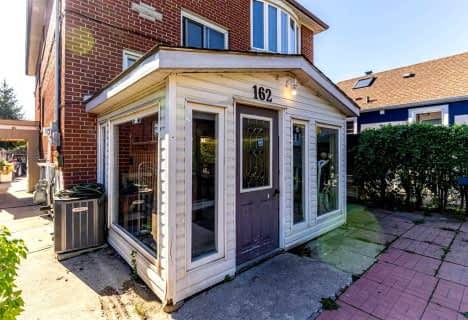 Baby Point is an affluent residential community in the York region of Toronto. The neighbourhood started off as two self-regulating boroughs. It is bordered on the west by the Humber River from south of Baby Point Crescent to St. Marks Road, east to Jane Street and Jane Street south to Raymond Avenue and Raymond Avenue west to the Humber. It is within the city-defined area of 'Lambton-Baby Point.'

Real estate in Lambton Baby Point is set in an area with historic stone gates at the junction of Jane Street and Baby Point Road which mark the entrance to the Baby Point pocket. This has oftentimes been thought of as an antecedent to contemporary gated communities. Baby Point is located on a peninsula of land—or a 'point' – which oversees the Humber River.

Within Lambton Baby Point Humbercrest Public School exists to serve the community. This public school is part of the Toronto District School Board and part of the SW1 Region in Ward 7. It was founded in 1915 and offers educational programs in both English and French from Junior Kindergarten to Grade 8. The French Immersion program starts in Senior Kindergarten.

Those searching for homes for sale in Lambton Baby Point should know that most of the homes in this York region enclave were built in the 1920s and 1930s. There is a strong sense of pride and ownership within this community.

This neighbourhood is located near some of the finest shopping centres in the City of Toronto. There are about 30 restaurants, bars and coffee shops in Lambton Baby Point and residents or visitors alike can walk to an average of 1 restaurant, bars or coffee shops in 5 minutes.

Lambton Baby Point's rich history predates to the 1600s when it was a wealthy Seneca Nation town known as Teiaiagon. The Seneca people found Teiaiagon to be the ideal spot for performing their fur trading activities since this high peninsula of land situated in a bend of the Humber River, was easily protected from attack.

The Seneca village had been abandoned for a long time when the Honourable James Baby settled on this peninsula of land overlooking the Humber River in 1816. The current day community is named after Baby, a member of a famous Quebec fur trading family and a former politician in Upper Canada. At that time, a lush apple orchard took up much of the land, and salmon swam in the Humber River. There was even a spring of fresh water that streamed from the hillsides. This water was bottled and shipped around the globe.

Lambton Baby Point real estate agents’ MLS listings might mention that most errands can be accomplished on foot in this community; however, public transit is available too.

Residents can take the Jane Street bus to the Jane station on the Bloor-Danforth subway line, or can walk to the station which is just about fifteen minutes from the Baby Point gates.

Commuters can enjoy rapid and simple access to Lake Shore Boulevard and the Gardiner Expressway via the South Kingsway. Lake Shore Boulevard transports motorists to Toronto's Harbourfront and financial district and provides connections to all of the major highways heading in and out of the city

Prices of real estate in Lambton Baby Point and anywhere else for that matter depend on the closeness to amenities and shopping opportunities. Here, residents can enjoy the comfort of being able to walk to the nearby shops on Annette and Jane Streets. These two shopping corridors offer an assorted variety of stores like European food shops, antique stores, a discount store, a grocer, as well as variety stores and restaurants.

Homes for sale in Lambton Baby Point benefit plenty from being close to entertainment attractions and recreational opportunities. The social and recreational heart of this area is the private neighbourhood club called Baby Point Club. It features two tennis courts, lawn bowling as well as a log cabin clubhouse that hosts various social events throughout the year.

Finally, the nearby Humber theatre is a popular venue for local movie goers as this theatre screens all the latest releases.